6-7 May 2017. We walked the Milford Track the “Great Walk” way in 2006. It was all a bit regimented for our tastes. You travel through as a wave of 40 walkers. First a bus then boat to the mouth of the Clinton River at the northern tip of Lake Te Anau. Then exactly one night at each of Clinton, Mintaro and Dumpling Huts. Another boat picks everyone up from Sandfly Point for the short journey to the Milford Sound wharf, where a bus awaits 40 somewhat grubbier walkers and whisks them back to Te Anau. At the time we remarked that it would make a better run than a walk.

The official Great Walk season ended on 4 May. It’s now the winter season where different – and much less restrictive – rules apply. And conveniently, there is still regular bus and boat transport operating until late May. So this was our chance for a run. But there was a problem – to fit the boat timetable we’d only have from 10:15am through to 2:00pm – less than four hours – to run 54km! No hope of doing that, so our lightweight running packs became rather heavier with overnight gear.

We shared the boat up Lake Te Anau with just four other trampers, then set off by ourselves up the Clinton valley. It was a foggy morning… 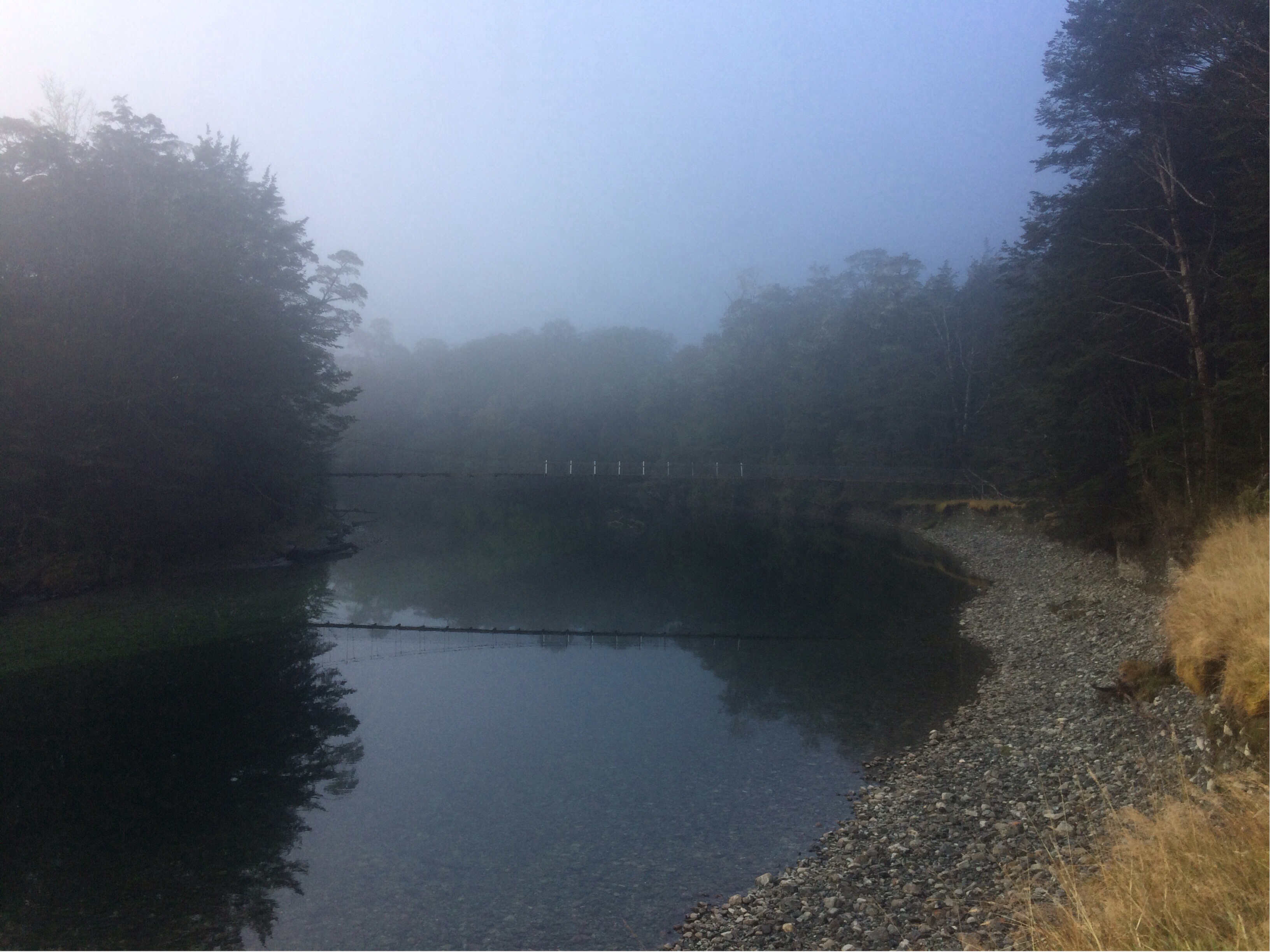 The water in the Clinton is crystal clear with a light green tinge.

Running conditions were close to perfection.

Further up the valley the vegetation thins out (it gets regularly squished by avalanches) and the cloud started to lift. Great views up the valley…

Nearing Mackinnon Pass, the cloud started to build up again.

The climb to the pass is never particularly steep, but still spectacular. 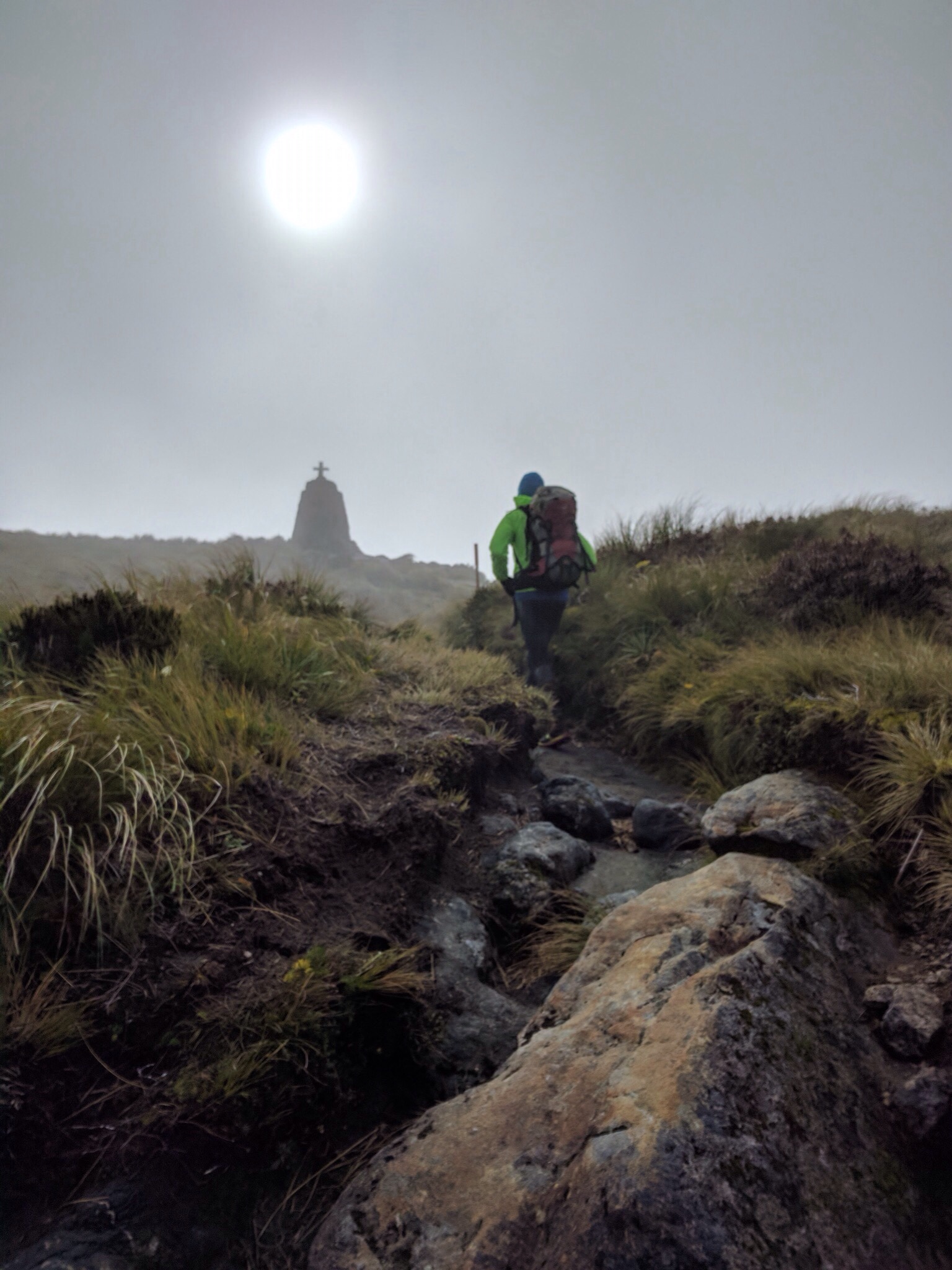 We stopped for a late lunch at Mackinnon Pass day shelter. It caters for two “classes” of walker…

Above the Pass, Balloon Peak hid behind a thin veil of cloud.

We could see back down the Clinton.

And into the headwaters of the Arthur.

The track drops steeply into the Arthur valley, with a staircase alongside a beautiful cataract.

Down in the Arthur valley we got a lovely view back to Sutherland Falls. They are reputed to be the highest in NZ.

Even with good head torches, it’s hard to run safely on the rockier sections of track. Even more so when you’ve been running for 8 hours. We did much of the last 10km at a fast walk.

An unexpected advantage of being out at night is the nighttime birdlife. We heard morepork and kaka, and saw a kiwi! (Technically, it was a Fiordland Tokoeka. There are an estimated 12,500 of them in the wild.) Only one of us had seen a kiwi in the wild before, and that was a Great Spotted Kiwi.

At 8:45pm we arrived at Sandfly Point, and crashed out for the night in the day shelter.

The next morning we were tired. Actually we were stuffed. Got up to take a few photos of Milford Sound…

And then it would have been nice to go back to bed and await the 2pm ferry. But one of our other aims for the year is to do some conservation volunteering. So we could hardly refuse Joan and Phil, the two DOC trackworkers, with their offer of a morning’s work shoveling and carrying gravel!

How we felt afterwards is unprintable!